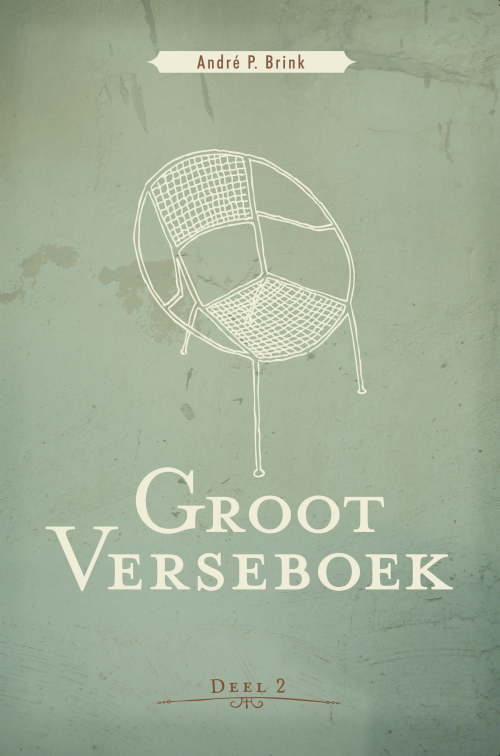 The second volume of Groot Verseboek.

Groot Verseboek represents an adventure of uncommon scope and ambition: the best and most representative poems produced in a language since its first hesitant, often stumbling, but always exuberant efforts just over a century ago, until the most up-to-date modern and postmodern verse written during the first decade of the 21st century. In a total of 1424 pages the work of some 216 poets is offered to the reader, from the First Language Movement in the late 19th century - chauvinistic and patriotic utterances, religious fervour, the intense involvement with nature, the upheavals of the Anglo-Boer War the first protestations of love in an environment of primness and prejudice - to the increasingly frank explorations of the individual consciousness leading to an early peak of creativity in the 1930s and 1940s, and wanderings through the dark night of the soul or the fierce and feverish light of private passions. The searing honesty in the agonies and ecstasies of the post-war decades brings encounters with Peter Blum (born in Trieste but soon an exponent of the most frank and fearless poetry written in Afrikaans in the years following the War), with the guitar music of Adam Small and the wild imaginings of Breyten Breytenbach, alongside of a formidable phalanx of women, Elisabeth Eybers and Ina Rousseau and Ingrid Jonker (who became the Sylvia Plath of Afrikaans), followed by Wilma Stockenström and Antjie Krog, by Petra Müller and Marlene van Niekerk and Trienke Laurie.

The landscape of Afrikaans poetry, originally marked only by whites, soon expands to encompass brown and black voices as well. They overwhelm the reader with nostalgia or prophetic inspiration, with sonnets and haikus and odes and crosswords and lullabies and hardboiled realism, with the erotic and the sardonic, with blasphemy and sly or iconoclastic humour, with explorations of dreams and memories, hopes and terrors, with landscapes of fear or serenity or guilt or innocence, intimations of mortality and immortality, of the most fleeting and the most lasting or pervasive, with rage and revolt, with resignation or quietly burning faith, preoccupations with Europe and the Far East and the Americas and, always, always, with Africa, its crudeness and relentlessness, its generosity and magnanimity and cruelty and terrors, its primordial past and imagined future, its magic and its unforgiving actuality its patterns and rhythms and surprises. There are evocations of purity and of sexual excess, of forgiveness or blame, of femininity and masculinity, of childhood and the unforgiving approaches of old age and death.

Groot Verseboek is an invitation to a voyage from the known to the unknown, from beginnings and origins to as-yet unpredictable endings; a journey of recreation and peace and tranquil musing, and of excitement and discovery, of harrowing truths and reassuring reveries, an exploration of heaven and earth and the waters under the earth, of heaven and hell, of the here-and-now and the ever-unreachable. It celebrates a language that originated in the mouths of the slaves and the dispossessed and the downtrodden in the old Cape Colony and which now is equipped - through its poetry as through everything else - to explore whatever is known and not yet known in the world, in the heart, or in the mind.